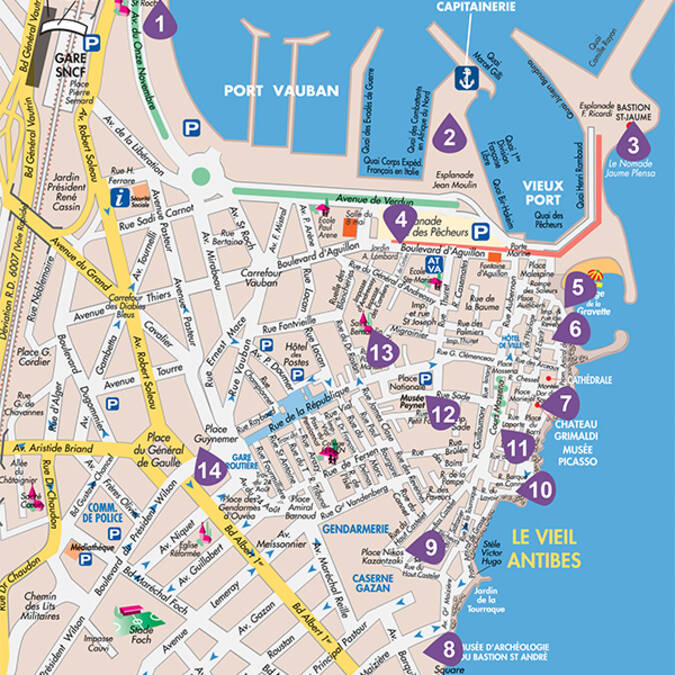 1 - Your journey can start from the Fort Carré. Built on a small peninsula, the fort reach 26 meters above the sea at its highest point. At the end of its construction in the 16th century, it was supposed to serve a surveillance and defense stronghold. Barely oversaw by Vauban, the Fort Carré hasn't been modified that much for the last five centuries and has been classified as Historical Monument in 1906 (1913 for the ramparts). The stadium was built in 1920 when the site became a military and sport school. It's open for public access since 1998.

2 - You can go around the Fort Carré and walk on the path that will lead you to the Port Vauban. The construction of the harbor, in the strategic point that is the Saint-Roch inlet, started during the 16th century. This old part of the harbor (the fisher peer), at the foot of the ramparts, still exist today and see everyday the departure and arrival of the fishers.
The marina, unveiled in 1971, is the biggest harbor in Europe in term of tonnage. It can host 1650 boats, and since 1986 can host the large unit (from 50 meters to 165 meters) in its Billionaires Peer.

3 - Go up on the Bastion St Jaume terrace to watch the yachts of the Billionaires Peer and the poetic Nomade, an impressive sculpture that is 8 meters tall, made by the Spanish Jaume Plensa, and which watches over the city since 2010.

4 – Go back toward the city and enter the Old Antibes through the Marine Gate. The former barracks of the boulevard d'Aguillon were transformed into studios and showrooms. Around twenty artists and artisans use those eight barracks to show to the visitors their creations. During summer, from 06:00pm to midnight, artists invite you to come and discover their art: exhibitions, demonstrations, workshops... At this end of the rampart, right next to the Esplanade du Pré des Pêcheurs, a staircase allows you to access the Jean Gismondi boardwalk. You can then go on to the Promenade Amiral de Grasse.

5 – On those ramparts, pass by the house where Nicolas de Staël painted more than 350 pieces from September 1954 to March 1955. You can either keep going on the ramparts, or enter the Old Antibes through an alley behind the house.

7 - The antique Grimaldi Castle officially became on the 27th of December 1966, Picasso museum, first museum ever dedicated to the artist. Its collection, at first made from the pieces left by the artist, was expanded with more works from Picasso given by people through the years, but also with the work of various modern artists.

8 - The Saint-André Bastion, built by Vauban in 1698, is made of two vaulted brick galleries topped by a large tiled terrace. Labeled Historical Monument in 1930, then Archeologic Museum in 1963, it hosts a collection started during the 16th century and gathering over 150 pieces, some of them being 2000 years old.

9 - The free commune of the Safranier, defined by the rue de la Tourrage and rue du Haut Castelet, is a small typical neighborhood of the Old Antibes. Built in 1966, the commune wants to keep its traditions and strengthen the ties among its inhabitants. The flowered and calm alleys of the neighborhood keep a trace of the Greek writer Nikos KAZANTZAKI. The beautiful Villa Fontaine, given to Antibes by the late Marie-Jeanne Fontaine, host artists (painters, writers, singers, filmmakers...) from 3 to 6 months.

10 – 10- Of the three wash houses of Antibes, only the one of the Tourraque still remain. Women used to go there to do the “bugage” (do the laundry). Observe carefully the walls and you'll discover faces recently hidden there by the artist Ho-Lui.

11 – Go back up the rue de la Tourraque until you reach the Portail de l'Orme, the oldest opening in the high city. The buildings that defined the Cours Massena dates from the Middle Ages and used to be “the Bourgade”. The “Place Vieille” is baptized Cours Massena in 1860 because the wife of the Marechal use to live there. At the beginning of the 19th, farmers already came there to sell their products, but the metallic architecture dates from 1928. To this day, the farmers market still takes place every morning (except on Monday, between September and June).
Around the corner onto rue Sade, a lectern representing a Dameron's painting, shows the place during the 19th century.

12 –On the Place Nationale, come and discover the Peynet and Cartoon museum. This small museum, unique in Europe, is dedicated to the “Lovers' Father”. Born in the early 80's, from the will of Raymond Peynet and the then Mayor of Antibes, the permanent exhibit of the museum is made from more than 300 pieces. As of 1995, the museum is open to other drawers for temporary exhibitions : the permanent collection is now twice as rich as its beginning.
You can also find on the site a sculpture made by Geneviève Labrousse and representing lovers, the new bandstand built with high-quality materials, and finally the Carrare marble column which dates from 1818.

13 – Reach the Saint-Bernardin chapel built in 1513. Labeled Historical Monument since 1989, this gothic church was built to host the Confraternity of the Saint Bernardin's White Penitents. She offers a wealthy amount of murals from the 16th and the 19th century, as well as a magnificent wood altarpiece from the 18th century.

14 – End your journey by going to the charming Place De Gaulle. By the way, try not to miss the vestiges of the Porte de France (up the rue de la République, in front of the pharmacy).