The rise of the resort really started after the First World War with the arrival of the Americans. From a winter resort, it became a seaside resort in the 20's: promotor Edouard Baudoin bought the Casino, wonderfully renovated it and opened it in spring 1924, in the presence of the intellectual and artistic elite of the time. Among the guests was Franck Jay Gould, a rich American heir, on holiday in the region. He fell in love with Juan-les-Pins, and decided to invest in the resort. It was the birth of Le Provençal. At the same time, Gerald and Sara Murphy, American patrons, decided to spend the summer in Cap d'Antibes and in tune with their ifestyle surrounded themselves with the famous artists and writers of the time (Pablo Picasso, Fernand Léger, Scott Firtzgerald, Ernest Hemingway, John Dos Passos...).

With them came the summer season and the fame of Juan-les-Pins.
Amongst the artists seduced by the charms of Antibes and Juan-les-Pins, Sidney Bechet resided there for a while and planned his festive wedding in the streets of Antibes. With other musicians, he brought jazz music to the resort. The Jazz Festival was created in July 1960 in his honour. Ever since, every summer, it takes place in  Pinède Gould, the musicians playing to the rhythm of the waves and cicadas, and the Mediterranean Sea for a backdrop. 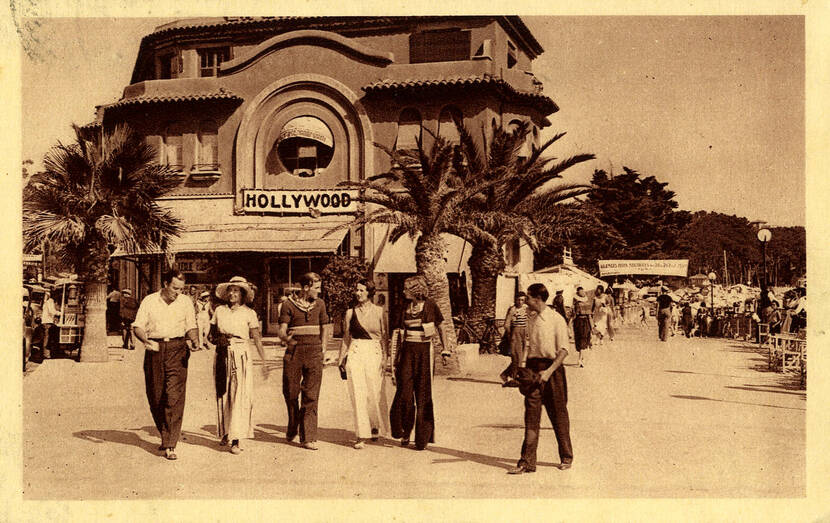 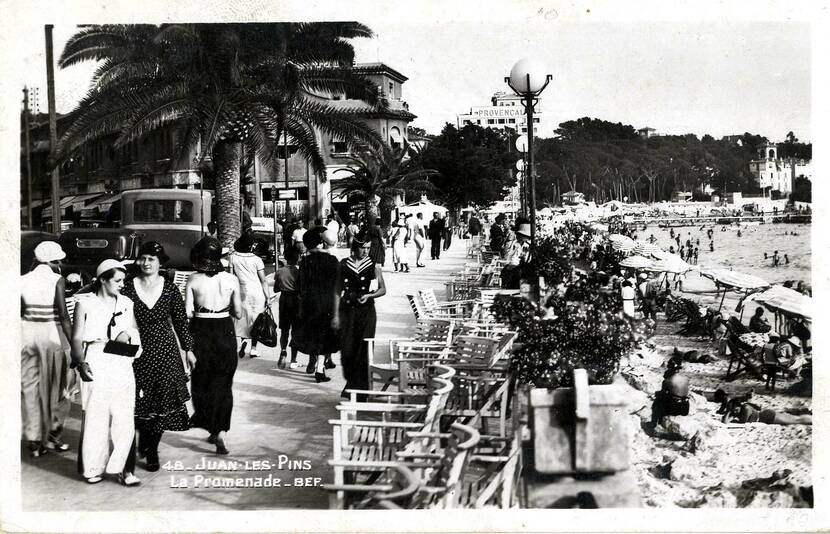 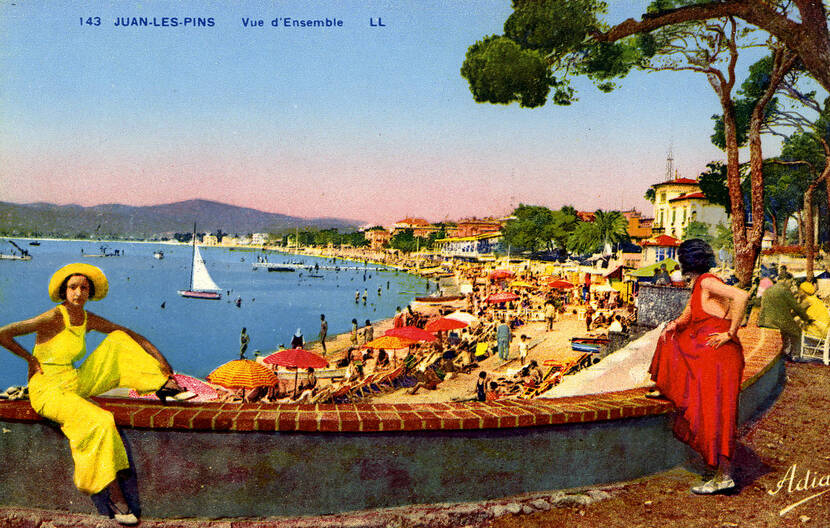 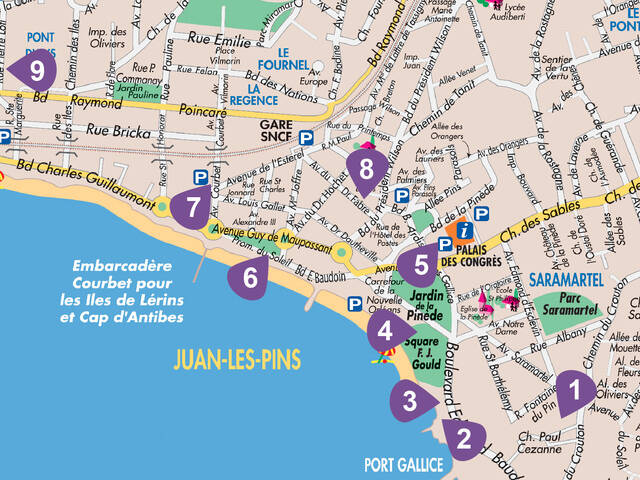 The story of Juan-les-Pins is told in its architecture

What to see in Juan-les-Pins:

1 – On the outskirts of the Cap d'Antibes, visible from the entrance to  Port Gallice on the hill (Chemin du Croûton), is the Chateau de Juan-les-Pins. Built before the resort around 1860, it was the residence of the Queen Emilie of Saxe, before hosting Rudolf Valentino and his wife for a summer. The architecture has been modified over the years, and it is now a residence split into appartements.

2 – Going back up to Juan-les-Pins, on your left, a small original, medieval style, Sienna coloured villa named Villa la Vigie, was also owned by Franck and Florence Jay Gould. Many artists and writers resided there, invited by the couple. Among them, Jean Cocteau, Estée Lauder, Charlie Chaplin and Pablo Picasso who, during a stay, painted the walls. But Franck Jay Gould didn't like it and had it covered over.

3 – A bit further on, the beautiful Hôtel Belles-Rives pays tribute to the writer Francis Scott Fitzgerald. First Villa St-Louis in the 20's, it was the summer residence of Francis Scott and Zelda Fitzgerald who spent a few happy months there. After they left, a young Russian, Boma Estène, bought the villa, expanded it and created a seaside hotel, the first on the Côte d'Azur. The present owner, Boma's grand-daughter, ensures that the spirit of the hotel never dies: she took her her ancestor's Art Déco furniture, photos and artworks out of storage and has put them in the bar, the restaurant and on the terrace.

4 – A short distance from the hotel, La Pinède.
The La Pinède park is in two parts. In the north is a playground for children, a carousel, a sculpture by Sosno, and benches in the sun or in the shade of century old pine trees.
To the south, "Pinède Gould" (easily recognized by the metallic structure overlooking the beaches) transforms itself every summer in July into an open air performance hall. There, various concerts, and in particular since 1960 the Jazz à Juan festival, are held. On the path along Pinède Gould, you can see the handprints of the jazz players that are part of the history of the festival.

5 – Going along La Pinède to the north, pass in front of the Juana, built in 1931 in the Art Déco style. A little bit further, you will see the Palias des Congrès. Completed in 2013, this ultra modern architecture  by Jean-Jacques Ory hosts numerous public events and private congresses throughout the year. The tourist office is on the 2nd floor.

6 – Back on the shopping streets, at the end of boulevard Edouard Baudoin is the start of the Promenade du Soleil. Cafes, restaurants and private beaches allow you to take a break and watch the sea. The fountains offer some coolness in the height of the summer. In July and August, there is a night market every night from 6:30pm to 12:30am.

7 - At the end of the Promenade, take the avenue Courbet. At the crossroads with avenue Esterel, are 3 Art Déco buildings, including the Hotel des Ombrelles.

8 –In rue du Dr Fabre, 2 buildings are worth looking at. Palais Biagini, almost opposite the post office, has no lack of originality with a construction that mixes various styles. A touch baroque, a touch Art Déco, this huge residence used to host a Genoa family, fleeing fascism in the 20's. A little further down the street, L'Auberge du Pin Doré, built in 1926, has just regained all its colours and original friezes.

9 - As you leave the town towards Cannes (around 3km away from La Pinède), you will find a 5 hectare garden, Parc Exflora, which around a big olive grove brings together the various expressions of a Mediterranean garden, from Antique Rome to the exuberant 19th century Riviera.