Between prestige and unspoiled nature 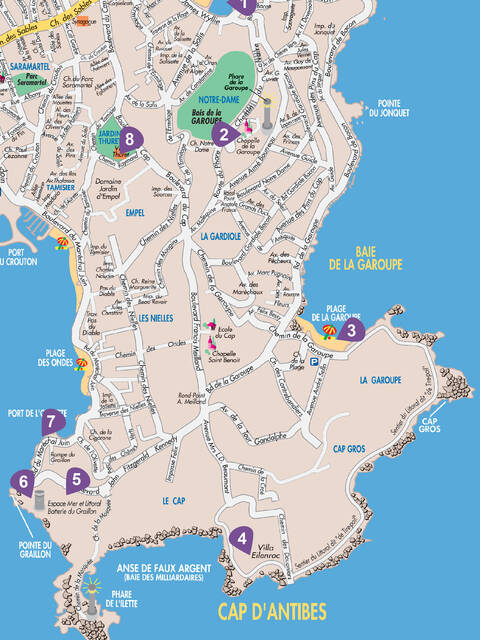 1 - At the start of Cap d'Antibes, on the west coast, is a lovely small renovated harbour called Port de la Salis. Built in the early 20th century, this harbour can host 245 boats, as long as they are not more than 7 meters long. The small stone wall allows dreamers to sit for a few minutes watching the boats.

2 – Opposite the harbour is the start of the Chemin du Calvaire  which leads to the Garoupe woods and plateau.
The Garoupe woods are 9 hectares of dense and unspoiled vegetation. Property of the Conservatoire du Littoral, it is a shady place for relaxing and strolling in a natural environment.
A few meters higher is the Garoupe plateau, a unique and not-to-be-missed place in Antibes Juan-les-Pins. It is also accessible by car via Route du Phare. There, you will find the lighthouse and the semaphore, property of the French Navy, the Peynet oratory, and the beautiful Garoupe chapel, which is a listed building.

3 – A little further south, still to the west, Garoupe bay, with its small private beaches, is one of the start points of the coastal path,  Sentier de Tirepoil. This area, property of the Conservatoir du Littoral, is protected. The path, a 5km loop, is easily accessible as long as you're wearing the right shoes (stairs prevent access for wheelchairs and pushchairs).

4 – At the end of the coastal path, before starting back via the road, you will find the Villa Eilenroc and its gardens. Completed in 1867 by the Dutchman Hugh-Hope Loudon, its name is an anagram of his wife's name - Cornelie. The gardens were completed a little later, in 1873, when the villa was bought by James Wyllie. The villa and its garden were bequeathed to the city of Antibes by its last owner, Mrs Beaumont, in 1982. A foundation was thus created and the city started on a vast program of renovation for the building itself, as well as for the furniture and gardens. In 2004, to complete the project, the eco-museum was created in addition to the olive grove and rose garden.

5 – On boulevard John Fitzgerald Kennedy, going toward the east of the Cap, on the right hand side of the road is Villa les Chênes Vert, which hosted Jules Verne, who spent 6 winters there rewriting his novels for the theatre.
Further on, in the middle of a big park, stands the majestic luxury hotel: Hôtel du Cap-Eden-Roc. Villa Soleil, built in 1869 by Hippolyte de Villemessant (owner of the French newspaper Figaro), hosted a number of writers looking for inspiration. Bought in 1887 by Antoine Sella who transformed it in hotel, it was his son, André, that from 1914 gave the establishment its mythical fame. Ever since then, every star in the world has stayed there.

6 – Batterie du Graillon is on a 2.2 hectares natural site belonging to the Conservatoire du Littoral, and is managed by the city of Antibes Juan-les-Pins. Its coastal fringe is classified as a Natura 2000 site. It hosts the Espace Mer et Littoral (Sea and Littoral Space) which aims to make the natural riches of the Mediterranean Sea and in particular  Cap d'Antibes known more widely. Open to public from 15 June to 15 September, it presents numerous exhibits and eco-touristic events.

7 – Villa Aujourd’hui is a modernist construction built in 1938 by the American architect Barry Dierks at the behest of Mrs Audrey Chadwick. Bought in the 50s by Jack Warner, it has hosted Charlie Chaplin and Ava Gardner.

8 – In 1857, the botanist Gustave Adolphe Thuret bought a small piece of land at the gateway to Antibes. There, he built a villa and planted then unknown plant species in its gardens. Property of the state, the  botanic gardens of Villa Thuret are managed by INRA and house a study and plant acclimation centre. Listed as a “Remarkable Garden” in 2007, the Thuret gardens have always fascinated scholars and people such as Georges Sand -  who wrote in 1868 that it was “the most beautiful garden that she had ever seen in her entire life” - and Gustave Flaubert. The park can be visited only on weekdays.